Android vs iOS vs Windows Phone or Why Android is better 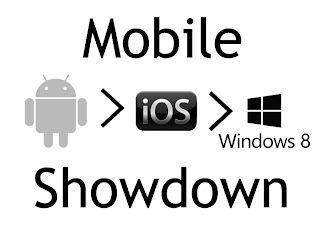 Preferences in mobile OS is definitely a personal thing. Nevertheless, I think it is possible to objectively evaluate the most popular platforms and compare them to each other. In this post, I will explain in 10 points why I think Android is the OS to beat :

On Android, your home screen is totally customisable. You have the choice on the number of desktop pages to be displayed, the choice to organize app icons however you like, add app widgets, choose how many and what app icons you have in your bottom dock, change their color, etc. Your home screen can be different than any other Android users if you really want to. If we compare that to iOS, you will realize soon enough that you have way more liberty because on iOS, all your apps will be displayed on your home screen no matter how many you have. Moving an app to the main home screen can be a pain, especially if it was all the way the end.  Another thing that bothers me on Apple's OS is that you have no app drawer. You cannot see your application in a simple list and this is where Windows Phone gains a point because on this platform, you have a beautiful app drawer. There is also a home screen that you can customize with tiles - which look a lot like Android widgets - but you cannot have app icons displayed on it. It is a different way of thinking, I would not say better or worse than Android's, just different.

Android let's you be free ! Yes, unlike iOS and WinPhone, you can use your device the way you intend to use it. No need for useless programs like iTunes to transfer files to your phone. Your phone does not have to look exactly like your friend's. The same goes for developers. They can choose to develop their app using native code, using HTML5 or Air for Android. You probably think that this information is not that relevant to you but in fact, it attracts more programmers to the platform so they can offer a wider variety of applications.

The price is often a big factor when considering buying a new device. Once again, unlike Apple's devices, Android's and Windows Phone's come in different categories of pricing. Apple only sells "high-end" devices that come with high-end prices even if the specifications of their machines are not always the best available. The other two platforms offer price ranges that are more realistic from my point of view. The fact that Apple has a huge portion of the market makes the other manufacturers to lower their prices so buying Android or Windows Phone is almost always way cheaper.

Apple have one form factor for phone and one for tablet. That's it (for now). So if you would like your phone to have a physical keyboard, you can't. Wanna have a tablet that comes with a kickstand, you have to wait for the next iPad. On the other hand, Android is everywhere ! On phones that have gamepads, on multi-media centers, on watches and soon it will even be in glasses. Whatever you like, Android's got it !

iOS and Windows phone are closed systems. That means that they do not release the source code of the OS to the public. Android does that and it creates communities of developers around the world that join their efforts to push forward the evolution of the platform. So it is not only a specially selected team that works on the advancement of the OS but anyone who would like to participate. No wonder new features are coming that fast.

Android is the only platform that offers real multi-tasking. You even have a dedicated button that allows users to switch between apps or kill them in a really neat menu. On iOS, I found that switching apps is a pain, unless you turn on the gesture that lets you swipe the screen to display the multi-tasking menu but most people don't even use it or know about it.

No wonder Windows Phone devices have a back button just like Android. The one and only button on iOS devices has proven to be not enough to provide full usability. This is why Android phone and tablets all also have a Home button and the multi-tasking button I was talking about in the previous point. A menu button also appears when needed. Whenever I use an app I never used before on iOS, I always get confused because I have to figure out where the developer decided to put the back button this time even if Apple provides guidelines on how to develop user interfaces for their platform.

The Android platforms lets you define which application to use when opening a certain type of file, on iOS, you can't. Pretty sure you get where I am going with this. This is only another mean for Apple to control the way you use your device. I just hate that.

Google Now is a new feature in Android JellyBean. It is a location-based app that gives you relevant information regarding where you are, what time it is, what you usually do at that time or location and what you recently search for using Google. It is just awesome. You can also use the Voice Search within the app by just saying : "Google". You phone will search the web or your phone or even do actions like text someone for you or set a reminder.

NFC is a way of communication that lets you share files and connect to other devices to perform actions like mobile payment. Since Android Ice Cream Sandwich, a lot of new devices include that technology that will soon change the way we use our phones and wallets. Imagine using your phone as an id or passport, leaving your home with your phone and nothing else in your pockets. Another 5 years and this delightful dream will come true.

So in conclusion, Android offers more than the others, iOS is ok but not up to speed when it comes to features and liberty and it is too early to say anything about Windows Phone. People have to stop being blinded by the perfect marketing schemes of Apple and realize there are other options that are less pricy and even more interesting.

ALL HAIL ANDROID !
PAF
Posted by pafoid at 5:47 PM