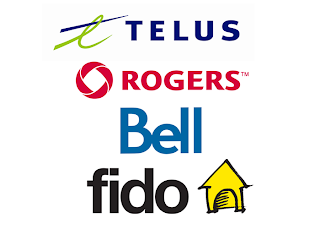 There are currently something like 26 millions wireless subscriptions in Canada only ! That means 26 millions cellphones, tablets and Internet sticks are activated and can be used everyday on the carrier's networks. The most of these subscriptions, actually more than 90%, are either with Bell Mobility, Rogers Wireless and Telus Mobility. For comparison purposes and also because they are my wireless providers, I will throw Fido Solutions in the mix. Before I start comparing these guys, lets begin by understanding what makes a good cellphone provider. I think it comes down to those 4 criterias :


I realise most people have no idea what 3g, 4g or LTE means. To be honest, nobody is interested in knowing this kind of stuff but nerds like me. So I will just lay it out for you. Before we had the smart-phones we know today we were using 2g networks, either GSM or EDGE with transfer speeds around 200 kbit/s. Then came the 3G networks with much faster transfer speeds, something like 28 Mbit/s. The third generation networks are known as CDMA and HPSA. The fourth generation, called 4G, includes the WiMAX and the LTE Advanced networks. They can provide theorical data rates of 1 Gbit/s. That means it will be fast as hell !


The 3 carriers have virtually the same service coverage so I won't be talking about it extensively. If you take a look at each carrier's map of their coverage, you will quickly realise looks almost looks exactly the same. Since I have been with Fido since day one, I won't compare the customer's service either. I can still tell you that Fido's is not that bad. The last item on the to-ignore list is the price of services since the carriers always offer deals and you have to shop around and bargain to get a good price. Don't be scared to call you own carrier and blackmail them into giving you a better price with threats of taking your business elsewhere. Getting a better price on your cell phone bill is just one annoying and time consuming customer's service phone call away.